Sign up for Digital Strategy Newsletter
Home › Chicago, the 18th most polluted city in the US, according to new study 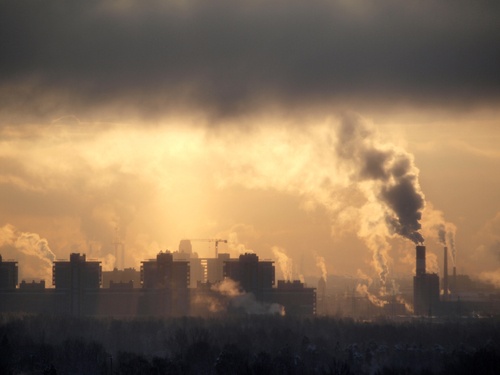 Chicago, the 18th most polluted city in the US, according to new study

Chicago residents are put at higher risk for asthma and other lung diseases, since the city’s air  quality is steadily decreasing, according to a new study.

Chicago was ranked the 18th most polluted city in the nation for ozone pollution, by the The American Lung Association, in its 2019 “State of the Air” report. This is the 20th annual report presenting rankings of air quality for the nation. Findings have not been good for Chicago. The study found the Windy City had a weighted average of 14 unhealthy ozone days between 2015-2017, much higher than the 9.8 unhealthy days average mentioned in last year’s report.

The city was ranked 22nd last year, and pollution in the Chicago metropolitan area increased “significantly” between 2014 and 2016, according to the American Lung Association’s 19th annual “State of the Air” study.

When compared to last year’s report, the increase of “unhealthy ozone pollution days” from 18 to 28 made the American Lung Association give the city an F for air pollution in the 2018 State of the Air Report. The results made Chicago the country’s 22nd most polluted city in 2018, worse than the 26th place it held in 2017, according to the report.

This year’s report brings even worse findings, which means that Chicagoans are being exposed to greater risk as time goes by, and immediate measures to ensure pollution reduction are desperately needed.

“Chicago residents should be aware that we’re breathing unhealthy air, largely caused by hotter days and vehicle emissions, placing our health and lives at risk,” said Angela Tin, national senior director for clean air initiatives for the Lung Association. “In addition to challenges here in Chicago, the 20th-anniversary ‘State of the Air’ report highlights that more than four in 10 Americans are living with unhealthy air, and we’re heading in the wrong direction when it comes to protecting public health.”

The public enemy for lung and respiratory health

Americans’ exposure to unhealthful levels of ozone or particle pollution is tracked by the annual “State of the Air” report. Both elements can make pre existing illnesses worse or cause them to appear; in some cases  these types of pollution can even be responsible for premature death, .

The study documents that ozone is more likely to build up and harder to clean out in warmer  temperatures caused by climate change.This year’s report covers the most recent quality-assured data available collected by states, cities, counties, tribes and federal agencies in 2015-2017. This year’s report showed that ozone levels increased in most US cities and attributes this rise to record-breaking global heat experienced during the three year period tracked by the report.

When ozone is inhaled, it irritates and inflames all of the air passageways in the nose, throat, and lungs.

“A lot of people compare ozone to a sunburn on the lungs,” said Jill Thompson, Chicago area communications manager for the American Lung Association. But, of course, there is no sun cream for this kind of burn, so how can we protect ourselves?

According to specialists, driving less, carpooling more, taking public transportation are contributing to pollution reduction. Not cutting the grass on high ozone days is another recommendation.

Air pollution is dangerous, and citizens are rightfully concerned

Both ozone and particle pollution are dangerous to public health and can increase the risk of premature death and other serious health effects such as lung cancer, asthma attacks, cardiovascular damage, and developmental and reproductive harm.

Compared to the 2018 report, Chicago experienced more unhealthy days of high ozone, according to this year’s report.

“My life has been affected by asthma since birth. I had to be very careful about walking outside year round. In the winter months it was the cold weather in the warmer months it was pollen,” said Chicago resident Renee Matthews, M.D. “Air pollution from cars and industrial buildings fills the air and even if I am in the car, it would cause me breathing problems. I often had to close the windows even if I had no air conditioning and it was boiling hot but I couldn’t breathe. There was a city near my hometown that was known for its odor due to pollution and I was required to cover my mouth and nose if I was walking outside in this city.”

What harmful particles are we inhaling that are endangering our health?

Although the report examined data from 2015-2017, the 20th annual report provides online information on air pollution trends back to the first report.

There is some good news, though. The 2019 report also found Chicago had the lowest levels ever of both year-round and short-term particle pollution.

Unhealthy particles in the air result from many sources, including wildfires, wood-burning devices, coal-fired power plants and diesel engines. Particle pollution can be deadly.

Technically known as PM2.5, these microscopic particles lodge deep in the lungs and can enter the bloodstream, triggering asthma attacks, heart attacks and strokes, and can cause lung cancer.

“Particle pollution is made of soot or tiny particles that come from coal-fired power plants, diesel emissions, wildfires and wood-burning devices. These particles are so small that they can lodge deep in the lungs and trigger asthma attacks, heart attacks and strokes, and can even be lethal,” said Tin. “Year-round particle pollution levels have dropped thanks to the cleanup of coal-fired power plants and the retirement of old, dirty diesel engines.”

About the American Lung Association

The American Lung Association is the leading organization working to save lives by improving lung health and preventing lung disease, through research, education and advocacy. The work of the American Lung Association is focused on four strategic imperatives: to defeat lung cancer; to improve the air we breathe; to reduce the burden of lung disease on individuals and their families; and to eliminate tobacco use and tobacco-related diseases.