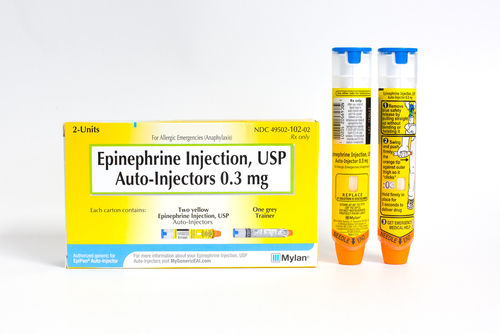 The FDA Approved the First Direct Generic Competitor to the EpiPen

The Food and Drug Administration (FDA) approved the new drug on Thursday, August 16th. The announcement paves the way for more affordable options of the lifesaving medication. In a recent news release:

“This approval means patients living with severe allergies who require constant access to life-saving epinephrine should have a lower-cost option, as well as another approved product to help protect against drug shortages.”

EpiPen delivers an emergency injection of epinephrine to people experiencing a life-threatening allergic reaction (anaphylactic shock) to bee stings, peanuts, and other allergens.

The decline of EpiPens

Manufactured by Mylan, EpiPen, has dominated the market for two decades without any generic rivals. Its price slowly raised over the years. But it wasn’t until 2016 that Mylan provoked public outrage by increasing the price to more than $600 for an EpiPen two-pack or five times what it cost 10 years before.

The move coincided with the beginning of the school season, when many parents of children with serious allergies start stockpiling the injector. Schools also have their own supplies of this drug. Currently, 41 states have laws recommending schools stock epinephrine.

Under pressure, Mylan launched its own authorized generic version at a 50% discount.

The new drug will be made by Israeli generic manufacturer Teva Pharmaceuticals. Similar FDA-approved injectors already exists such as Adrenaclick and Auvi-Q.

Both devices deliver epinephrine, which reduces swelling in the airway and increases blood flow in the veins when people enter anaphylactic shock.

Teva’s product on the other hand, is the first authorized copy of the EpiPen and could be substituted for the brand-name product by a pharmacist. Teva will sell generic versions of both EpiPen and EpiPen Jr., for children.

EpiPen is a drug-device combination, which made it hard for generic copies to mimic the device that would comply with FDA standard. To make this process easier, FDA issued guidance in November 2017, saying some design differences may be approved as substitutable products. “Going forward, we’ve committed to put out guidance laying out how a generic firm would copy a particular complex drug at least two years in advance of the first potential generic entrant. This will make it easier for generic firms to plan how they can copy complex drugs,” Gottlieb said at the time.

Anaphylaxis occurs in approximately one in 50 Americans. Most experience a recurring episode, which forces them to carry an emergency dose of epinephrine at all times.
Teva’s drug is meant to protect patients in the case of an epinephrine shortage such as the one in May. Pfizer, that makes the devices in partnership with Mylan, invoked manufacturing issues at a Pfizer factory.

The approval of the new generic was received well by the American Academy of Allergy, Asthma. “We strongly support any measures than can help provide these life saving medications in a more cost-effective manner, especially given the concerns about the shortages of EpiPens,” Dr. Robert Wood, president of the academy told CNN.

The Israel-based Teva didn’t offer details about a launch date or a possible price.

“We’re applying our full resources to this important launch in the coming months and eager to begin supplying the market,” said Brendan O’Grady, executive vice president who heads North America Commercial at Teva.

That means the drug won’t make it on pharmacy shelves in time for the school season.

To avoid an epinephrine crisis, the FDA announced Tuesday that it is extending the expiration date for certain EpiPens. “We are doing everything we can to help mitigate shortages of these products, especially ahead of the back-to-school season,” Dr. Janet Woodcock, director of the FDA’s Center for Drug Evaluation and Research, said in a written statement.

“The path to developing generic drug-device combination products like this one is challenging,” FDA Commissioner Scott Gottlieb said. “We remain committed to doing our part to provide scientific and regulatory clarity for sponsors seeking to develop complex generics, as well as prioritize the approval of medicines with little or no generic competition,” Gottlieb added.

For more insights on how FDA approval has been changing the healthcare industry, read here on the FDA’s approval initiatives with AI.