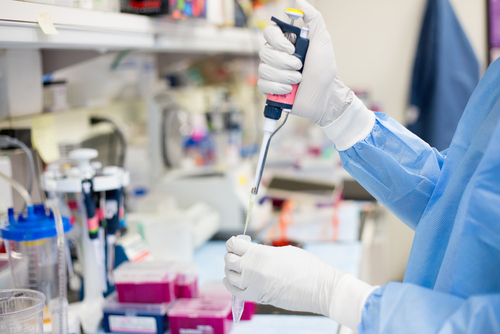 The National Science Foundation (NSF) just awarded a grant of more than $660,000 to Illinois State University (ISU) for the construction of a cutting-edge microscopy laboratory.

The Confocal Microscopy Core Facility will be set up at ISU’s Science Lab building this fall. Its centerpiece, a high-tech laser, will allow scientists to observe in great detail the building blocks of cells and the organization of tissues.

The project is the result of a joint effort of scientists from Illinois Wesleyan University, the Millennium Pain Center in Bloomington, and the USDA National Center for Agricultural Utilization Research in Peoria.

The facility is meant to advance innovation in genetics, cell biology, development, neuroscience, and plant science. “It will produce 3D reconstructions of complex tissues like nervous system and muscle, and time-lapse videos of processes such as embryo development and wound repair,” said associate Professor of Genetics Kevin Edwards, the principal investigator of the grant.

Driving innovation one grant at a time

In addition, the Confocal Microscopy Core Facility will host major research projects from the study of bioenergy crops to the aging of cells.

It’s no coincidence that the NSF choose to build this laboratory in Illinois.

The Illinois State University’s scientists have gained international reputation as trailblazers in neuroscience through their innovative discoveries.

In 2014, the NSF awarded a $510,000 grant to Wolfgang Stein, an assistant professor of Cellular Neurophysiology. Stein runs one of the few labs in the world that studies neurons using optical imaging.

A year later, in 2015, Andres Vidal-Gadea, an assistant professor of molecular neuroethology, and his team discovered the first sensor of the Earth’s magnetic field in animals in the brain of a worm. “This could unlock the key to how all animals migrate,” Vidal-Gadea said at the time.

In 2018, the university received multiple grants. Two of the most substantial ones?

One from the NSF of over $316,000 to acquire a power cell sorter. Another of $430,000 from the National Institutes of Health (NIH) to support the study of immune systems in reptiles and their similarities to humans.

Illinois, the Midwest next science hotspot

A unique feature of the grant is that it will benefit researchers from outside the university, turning the facility into a science hotspot of the Midwest.

Since confocal microscopes are widely used in biomedical research, Edwards explained, undergraduate and graduate students will have the opportunity to learn cutting-edge microscopy techniques. Over 50 undergraduate researchers per year are projected to learn widely useful science, technology, engineering, and mathematics (STEM) skills through this training.

Middle and high-school student groups will also be able to take tours and observe researchers as they study live cells. Students in grades kindergarten through 12 enrolled in programs such as the Illinois Summer Research Academy and ISU’s Louis Stokes Alliance for Minority Participation will be the first to learn about cells, tissues, light microscopy, biotechnology, and neuroscience.

More than just a science lab, this new facility is yet another step towards the consolidation of Illinois as a digitally savvy healthcare state.

In recent years, academia has become a furnace of innovation and that trend can be best observed in Illinois. Big pharma players and startups alike are competing to form alliances with renowned universities in order to achieve medical breakthroughs at an accelerated pace.

The ISU’s new laboratory is all the more important since the field of 3D printed organs for transplants is experiencing unprecedented growth. The global 3D bioprinting market is expected to reach a whopping $2.6 billion by 2024. Human 3D bioprinted tissue such as liver or kidney tissues, would speed up drug discovery and make treatments more affordable. In fact, a Chicago-based startup is on the cusp of cracking the code of bioprinting human cardiac tissue.

Plus, studying embryo development and wound repair with the help of this high-performance microscope could lead to important advances in contraceptives and infertility treatments.

Finally, the imaging capability of this equipment can help scientists make great leaps in radiology. Imaging technology is what enables physicians to diagnose and treat serious diseases without surgery.