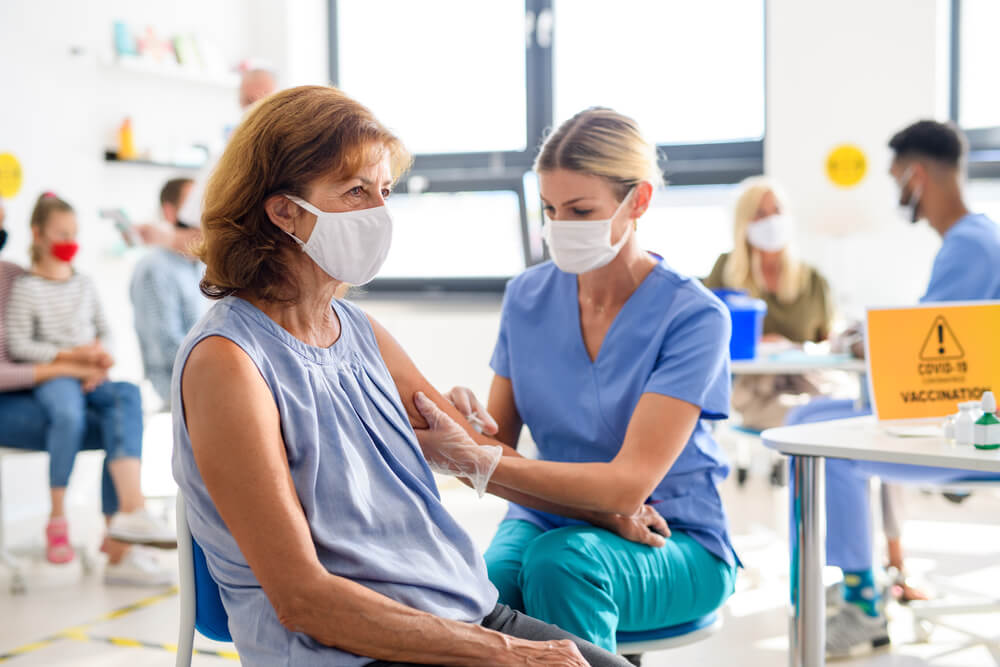 The first series of healthcare workers in Chicago are receiving the first round of the highly anticipated COVID-19 vaccine. This is Phase 1A of Chicago’s vaccination plan, which is centered on healthcare workers and long-term facility residents, like many other parts of the country. Phase 1A kicked off in the late weeks of December 2020 and is expected to last through February 2021.

Although the vaccination is primarily focused on hospital staff, a small group of emergency medical service personnel is also going to be vaccinated for obvious reasons. Even though Chicago has worked extremely hard to make certain that the vaccine is distributed equally, city officials have questioned the transparency of the process, with a few individuals requesting statistics on race and ethnicity.

The mass vaccination of the city’s 35 hospitals, as well as the long-term care facilities, is something that the city has been waiting for for some time now. And even though Phase 1A is the first in a long series of vaccinations, it’s a great place to start. And yet, not all healthcare officials agree.

Several primary care physicians at risk of exposure are refusing to get the vaccine even as the country’s daily death counts from the coronavirus continue to surge. People have been waiting for the vaccine for a long time. It has perhaps been the brightest spot for millions of hopefuls that continue to struggle under the weight of restrictions and state-sanctioned safety regulations.

Though the vaccine has certainly brought hope that this pandemic will soon be quenched in the next coming months, there are still broad gray areas. That’s why several healthcare workers are refusing to get vaccinated and it’s easy to understand why.

At Chicago’s Loretto Hospital, which is situated in a majority Black community, 40% of the staff surveyed before the first phase of vaccination was rolled out were honest about their refusal or hesitancy to get inoculated. Most of the hesitancy is attributed to deep-rooted cultural believes and superstitions.

There has always been a mistrust of vaccinations among Black and other minority communities and populations. A lot of the mistrust has also been fueled by the lack of transparency between pharmaceutical companies or research companies and the government about the research and testing process.

Understandably, those that have refused the vaccine don’t want to be used as guinea pigs, which has happened in instances such as Tuskegee or when Henrietta Lacks’ cells were used without her consent. And this hesitation is being felt all over the country, not just among Chicago healthcare workers.

For example, according to reports from the L.A. Times 1 in 5 front-line nurses and physicians at Providence Holy Cross Medical Center in Mission Hills, Calif., have purportedly rejected the vaccine. The hospital staff at Doctors Hospital at Renaissance in Edinburg Texas have also been wary about being vaccinated.

As you can imagine, the doubts that have been circulating among healthcare workers across the nation have come as a shock to the researchers that worked day and night on the vaccine. Many assumed that the healthcare workers would be easily sold with scientific data backing the vaccine, but it doesn’t seem like that’s the case.

The scientific evidence thus far proves that the vaccines are safe and efficient having conducted trials involving thousands of participants of all walks of life including the elderly and those suffering from chronic conditions. Researchers continue to maintain that the vaccine is safe for everyone except those that have exhibited any allergic reactions to the ingredients.

In some cases, such as in pregnant or breastfeeding women, where the research is still very lacking, it makes sense for skepticism to prevail. Even though there haven’t been any clinical trials on pregnant women, researchers continue to maintain that the vaccines are unlikely to pose any risks or health concerns to pregnant women that do take the vaccine.

The extent to which frontline workers are refusing to take the vaccine is yet to be known, but this has raised concerns that the public will soon reject the vaccine when it’s their turn to receive it.

The consequences of this happening could be disastrous, to say the least. If only a handful of people agree to get vaccinated, the pandemic will take a lot longer to extinguish, which will cause continued surges and the strain on hospital staff will worsen. Let’s not even get started on the economic upshot that years of the pandemic would cause.

Our capacity to return to normal as things were pre-pandemic will depend on how successful the vaccination process is. So what are hospitals in Chicago and all over the state doing to deal with the mistrust and tentativeness? Many hospitals are sharing instructional videos to persuade reluctant staff members.

There are lots of interactive webinars available as well that are attempting to explain the science of vaccines. The point is to educate as many people as possible so that they can then make informed choices. Acknowledging the novelty of the vaccine and people’s concerns as valid will also be essential in addressing and alleviating people’s concerns.

The pandemic has had a devastating impact on the world. Now that the vaccine is here with us difficult choices have to be made in the clamber to vaccinate millions of healthcare workers across the country. Not only do decisions have to be made regarding who gets the vaccine first and who must wait, but safety concerns regarding the vaccines have also started to surface.

People are scared to receive the vaccine, and it is understandable why. The vaccine is still relatively new and not much has been discussed about it. So if the authorities and hospitals have any chances of convincing hospital staff to line up in the numbers, they must strive to make the process as transparent and open as possible. This is the only way to convince the few doubting Thomases.