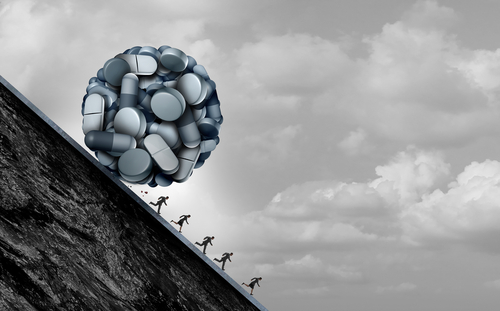 Data from a new study prove the opioids epidemic is directly related to marketed prescription opioids, and that the most affected areas of the United States are those where pharmaceutical companies spent the most to market such drugs to physicians.

In the new JAMA report, researchers, led by Scott Hadland at the Grayken Center for Addiction at Boston Medical Center, investigated the connection between opioid marketing and prescriptions. They found that such a connection is too strong to be overlooked, since one in 12 U.S. physicians (and one in five family doctors) released marketing related to opioids between 2013 and 2015.

What are opioids and why are they dangerous?

Opioids are a class of drugs for which the active substance is naturally found in the opium poppy plant. Even though some opioids are made from the plant substances directly, while others come from a lab where scientists produce a substance with the same chemical structure, they all have the same effects. They basically contain chemicals that produces a relaxing effect on the body, and this is why they are used to relieve pain. Prescription opioids mostly treat moderate to severe pain, but some can also be administered when treating coughing or diarrhea. Since their side effect is to make people feel very relaxed and “high”, opioids were eventually used for non-medical reasons. Use of opioids can result in serious addiction and overdoses; death is a common occurrence. One of the world’s most dangerous opioids is heroin, which is never used as a medicine in the United States.

Which are the most common prescription opioids?

People can easily overdose on prescription opioids, simply by taking more drugs at once. This is why the only way to reduce the threat is to prescribe less opioids. An opioid overdose happens when someone uses enough of the drug to cause life-threatening symptoms or death. This can be inflicted on oneself or others, if more of the drug is administered without patients knowing it. An opioid medication overdose usually causes breathing to slow down or stop altogether. By consequence, less oxygen is transferred to the brain, and this can cause coma, permanent brain damage, or death. Opioid overdose also worsens pre-existing medical conditions.

Opioid overdoses and deaths remain a problem in the U.S.

Between August 1, 2013, and December 31, 2015, $39.7 million in opioid marketing was targeted to 67,507 physicians in 2.208 US counties, the JAMA population-based, cross-sectional study found. One year later, an elevated overdose mortality could be observed exactly in those counties where opioid marketing was more significant, the association between the two was mediated by opioid prescribing rates. The number of marketing interactions with physicians per patient proved to be in direct relation to the mortality rate, more so than the dollar value of marketing.

Opioid overdoses and deaths remain a problem across the U.S. and the numbers are dreary. Each year, more than 17,000 overdose deaths are caused by prescription opioids, which  skyrocketed over the last 20 years. Overdose deaths increased by a whopping 200 percent between 1999 and 2014, the CDC said, with another 28 percent added only between 2015 and 2016.

According to the JAMA report, a connection to prescriptions has been found in 40 percent of all opioid overdose deaths in the U.S.. In addition, prescription drugs are the first opioids usually taken by people with opioid use disorder.

Cabell county, West Virginia, was given as an example of extreme marketing. Here, doctors were paid an average of $49.95 per year for every 1,000 county residents, the annual US average being $1.57.

Said Hadland, “These are areas that are just being unduly hard hit by opioid overdoses and marketing.”

We are experiencing a paradoxical situation; significant efforts are made to reverse the opioid prescription and death trend,while the millions of dollars that go into direct-to-physician marketing are actually undermining those efforts.

“Our findings suggest that direct-to-physician opioid marketing may counter current national efforts to reduce the number of opioids prescribed and that policymakers might consider limits on these activities as part of a robust, evidence-based response to the opioid overdose epidemic in the United States,” they wrote.

The healthcare system is trying to find ways to reduce opioid prescribing, since physicians represent a frequent source of prescription opioids for those who use the drugs for non-medical reasons. Over the last decade, opioid prescribing has decreased, but it’s still three times higher than in 1999. As the recent report finds, the decrease is not equally significant in regions where more opioid-overdose deaths were registered.

Payers and providers alike are trying to find efficient ways to reduce opioid prescriptions and provide help for those already addicted. This can be achieved by using social determinants of health data to find out who is more prone to opioid abuse. Programs have been devised and goals have been set by multiple payers to reduce opioid prescriptions. In order to avoid opioid addiction, other ways to manage pain are promoted. These include counseling and behavioural therapies, but also medication-assisted treatments. Medication used is other than opioid based.

Fighting the opioid epidemic has become a federal concern. Access to treatment for opioid addicted patients was expanded last year, when President Donald Trump signed a bipartisan law that made such an action possible by providing funding for research on non-addictive pain management. In Illinois, for instance, more people replaced their opioid prescriptions for medical marijuana ones, after the opioid law was signed, last autumn, by Gov. Bruce Rauner.

About JAMA Network Open: JAMA Network Open is the new online-only open access general medical journal from the JAMA Network. Every Friday, the journal publishes peer-reviewed clinical research and commentary in more than 40 medical and health subject areas. Every article is free online from the day of publication.