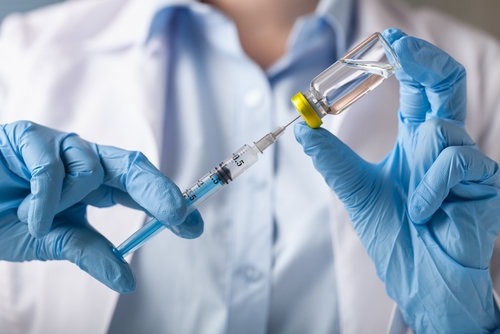 Researchers On The Verge Of Universal Vaccine Breakthrough

Researchers from the University of Pennsylvania believe they are on the verge of taking a universal vaccine for the flu to human trial stage after successful preclinical testing.

The researchers are optimistic they can take the candidate vaccine to human trial within two years and the vaccine could be ready within 10 years.

The vaccine has already gone through animal testing, where it was a success, and was reported to have protected mice from various strands of the flu.

To be sure of their results, the researchers replicated the tests in rabbits and ferrets, with the next step being to test the candidate vaccine in primates and eventually humans.

One of the researchers working on the vaccine, Scott Hensley, sounded very optimistic about the prospects of their study, declaring: “If it works in humans even half as well as it does in mice, then the sky’s the limit – it could be something that everyone uses in the future to protect themselves from the flu.”

Hensley said when they started testing the vaccine, they were “blown away by the magnitude of the antibody response.”

His colleague, Drew Weissman, said their prospective vaccine had done better than other studies, as it “was able to elicit protective responses against a conserved region that offers broad protection.”

The researchers said if the vaccine proves to be a success, it would be different from other vaccines, which are given seasonally, as this one would be given a few times through a person’s life, as what happens with tetanus.

According to the New Atlas website, current flu vaccines are designed to target proteins on the surface of the influenza virus called hemagglutinin (HA).

“The unique fingerprint on the head of these proteins is what our current flu vaccines aim for, but these protein heads are rapid mutators, which is why we need to reformulate our flu vaccines every year,” the website explained.

How this vaccine is different

The research, which was published in the journal Nature Communications said due to the short-term nature of the currently available vaccines, there was urgent need to develop a “vaccine that confers long-term protective immunity against antigenically distant influenza virus strains.”

A news release by Penn Medicine News said the candidate vaccine does not use flu HA proteins, but uses mRNA molecules that encode HA proteins to elicit an antibody response.

“When injected into a recipient, these RNAs are taken up by immune system dendritic cells and translated into copies of the HA protein by the protein-making machinery within those cells. This within cell production of viral proteins does a better job of mimicking a real flu infection and elicits a very powerful protective antibody response,” the news release said.

Weissman and his colleagues have in the past scored some success with mRNA vaccines, as in 2017, they developed a vaccine for Zika virus that proved effective on mice and monkeys with just a single jab.

However, a concern about the University of Pennsylvania vaccine is that it fell short of protecting against a strain related to H1 flu virus, but the researchers said the “the beauty of the mRNA vaccine approach lies in the fact that it could be easily adapted to encode multiple antigens at once and can be quickly altered to keep apace with viral evolution.”

In spite of various flu vaccines, the Centers for Disease Control (CDC) estimates that between 9.2 million and 35.6 million people are infected with the virus in the United States annually. It is also estimated that between 140,000 and 710,000 people are hospitalised annually and between 12,000 and 56,000 deaths annually since 2010.

In the U.S flu season usually begins in October or November through March, with the CDC saying, for the 2017-2018 season, the outbreak’s activity began increasing in November reaching an extended period of high activity during January and February nationally, and remained elevated through the end of March.

The CDC said the 2017-2018 flu season was high in severity, “with high levels of outpatient clinic and emergency department visits for influenza-like illness, high influenza-related hospitalization rates, and elevated and geographically widespread influenza activity for an extended period.”

The CDC said in 2017 it had introduced a new methodology to classify the seasonal severity of flu, and it applied this methodology from the 2003-2004 season to the 2016-2017 season.

“The 2017-18 season was the first season to be classified as a high severity across all age groups,” the CDC said.

In addition, the CDC says flu outbreaks cost the U.S $10 billion annually in direct hospitalisation costs, with the Fortune website adding that an additional $9.4 billion being lost in production.