Sign up for Digital Strategy Newsletter
Home › New Report: One In 3 UK Doctors Suffer From Burnout, Exhaustion and Stress 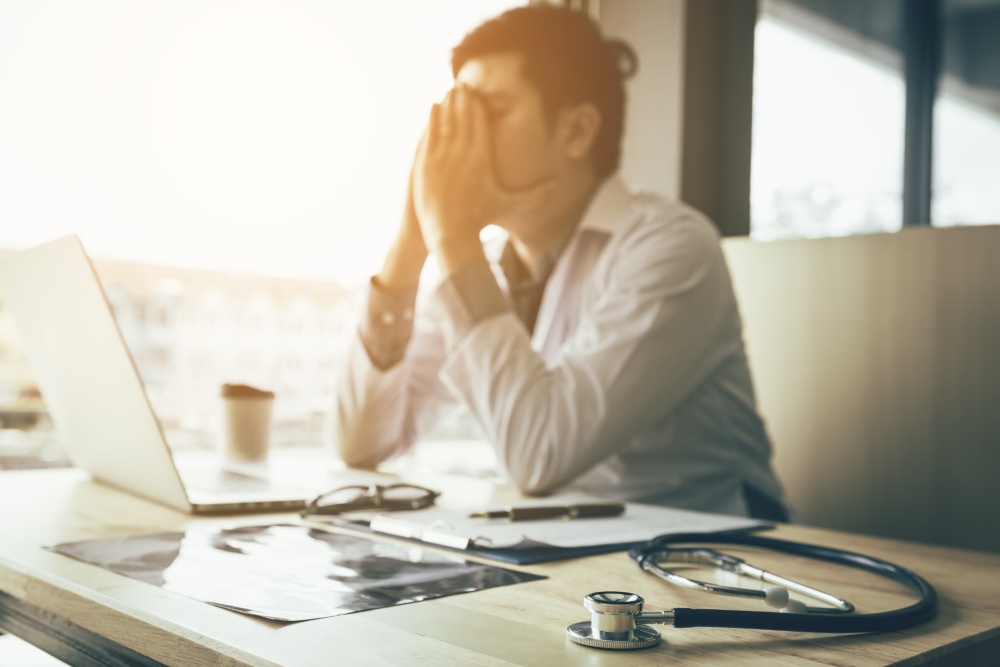 New Report: One In 3 UK Doctors Suffer From Burnout, Exhaustion and Stress

A new study shows that up to one in three United Kingdom doctors are affected by burnout and work-related stress, the latest research to shine a spotlight on an issue that is becoming increasingly worrisome in the medical sector.

The report, which was published in the online journal BMJ Open, showed that doctors working in emergency medicine and general practice are the most at risk of exhaustion, stress, and compassion fatigue. The report said these doctors often work under pressure due to the nature and number of patients, with burnout and exhaustion being exacerbated by time constraints and understaffing.

The report defined burnout as exhaustion of physical or emotional strength or motivation usually as a result of prolonged stress or frustration, describing it as a globally noteworthy issue among medical staff.

Doctors at higher risk of burnout

The report says doctors are known to be at higher risk of anxiety, depression, substance abuse, and suicide when compared with the wider population.

The research sought to find out how resilient doctors in the UK were and how well they cope with the pressures they face, as well as prevailing levels of stress and burnout in the profession.

“The nature of their work can mean exposure to high-pressured environments resulting in high levels of stress. These factors, in addition to a heavy workload and long working hours, can have an adverse effect on both physical and mental well-being,” the report says.

In addition, it says the complexity of the doctor-patient relationship can introduce a wide variety of both positive and negative emotions for doctors. A finite budget, administrative constraints and the perceived litigious climate faced by doctors are also undoubtedly contributory factors to the increasing levels of burnout being reported by medical staff.

READ
VITAS Healthcare at a Glance

Furthermore, the study said 18 percent of respondents in the survey had clinically significant PTSD symptoms including flashbacks, anger, and feeling on edge.

This latest study has been described as the biggest published survey of its kind, which underlines the emotional impact on many doctors working in the UK’s National Health Service (NHS).

An NHS spokesperson was quoted as saying: “Staff are the lifeblood of the NHS, which is why we are now for the first time offering the most comprehensive national mental health support offer to doctors of any health system in the world and are committed to doing similarly with other staff groups, as part of our NHS long-term plan.”

A total of 1,651 doctors from a wide range of specialties and grades across the UK participated in the study. Of these, more than 100 doctors fell into the at-risk category of high burn out, high secondary traumatic stress and low compassion satisfaction.

The study was carried out between October and November 2018.

In 2019 the British Medical Association released a study warning of a serious mental health crisis among doctors and medical students.

Are physicians in the U.S. in a better position?

The latest findings are quite similar to what is happening in the United States, where a report by the Harvard T.H. Chan School of Public Health, the Harvard Global Health Institute, the Massachusetts Medical Society and the Massachusetts Health and Hospital Association (MHA) said burnout had become widespread and was driven by rapid changes in health care and in the doctors’ professional environment. The report’s authors warned that the consequences of physician burnout are quite dire and could have an impact on the health and well-being of the American public.

Insights
New Study Highlights the Potential Benefits of Gaming for the Brain
February 9, 2022
871